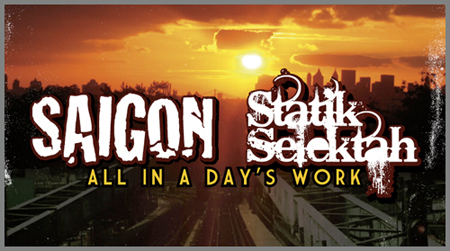 Having learned his lesson after the Atlantic fiasco that has prevented Sai’s release for the past 4 years, Saigon has signed a deal with Amalgam Digital that I believe will be model for independent artists in the future.  Instead of signing with a traditional deal with an indie label, Saigon’s deal simply grants Amalgam the right to distribute his tunes to various digital retailers.  As Sai put it in a recent interview, he is nobody’s artist and controls his own career at this point.  Due to that level of autonomy and the lack of physical CD sales in recent years, I believe many artists are going to be looking at going straight to digital distribution.

The deal is being kicked off with the release of Saigon and Statik Selektah’s album All in a Days Work.   Amalgam is not promoting the album and thus has a much lower overhead, so Saigon had much more artistic freedom in the creation of this album.  It’s arguable that that All in a Day’s Work is rawest material Saigon has made since his Yardfather release.

For artists that aren’t doing huge numbers and can pack stadiums for shows, 360 deals like Jay-Z’s won’t be available, and the ability to control their own content, promotion, and release schedule will be the most effective means to get their music in the hands of listeners while deriving revenue.  Essentially, by going to directly to a digital distributor, the artist is cutting out the record label, another middle man.  The artist will be allowed to retain a higher percentage of their publishing rights and sales profits.  Through the efforts of business savvy artists or artists with effective management teams, much of the bloat in the music industry could be cut away.

As CD sales continue to plummet, the music industry can no longer afford the many tiers of administration it has established over the past century.  When consumers were forced to pay top dollar for recordings of their artists, the industry could afford to have huge A&R and promo teams that orchestrated the release of thousands of albums a year, but when the top selling albums of the year barely go platinum in a week, the industry can no longer afford to pay everyone’s salary.  Cutting out independent record labels or essentially forcing each artist to become their own indie label removes a lot of the gratuitous excess and places a high percentage of the sales revenue directly in the artist’s pocket.

This entry was posted on Saturday, March 28th, 2009 at 7:16 pm and is filed under Copyright, Entertainment Business, Intellectual Property. You can follow any responses to this entry through the RSS 2.0 feed. You can leave a response, or trackback from your own site.